Mozart’s Symphony No.41 in C Major Expressed as a Weapon 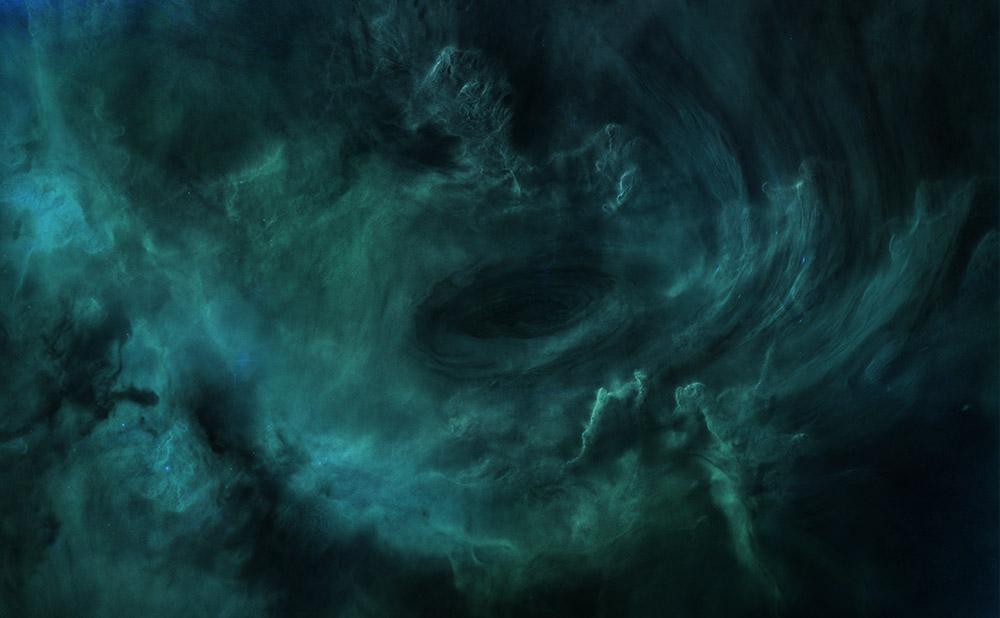 Key notes flaring in a void of silence.

The sonic mines attached to the hull with barely any resistance, their disc-shaped forms peppering the surface like black tumours. The ship, the Psychotic Amnesty, seemed unaware of their presence, its attention consumed with reaching the gas giant some distance ahead.

It only began to react when the first bars of Wagner’s Ride of the Valkyries drove through the surface of the hull, triggering a crisscross of sharp cracks across the panicking vessel, the only visible sign of intrusion. The mines sent back a continuous feed and immediately picked up a jarring series of muffled clunks from the Psychotic Amnesty’s internal defences, quite ruining the melodic rhythm of the ancient opera.

The ship’s response receded into the background when more of the mines began their sequence, each inflicting its own localised auditory mayhem. As the hull began to buckle, the sound waves penetrating the shielded exterior, more joined to form a discordant cacophony far removed from the elegance of Wagner’s careful composition. The clamour quickly grew to a sonic uproar, each new mine heaping more confusion on what should have been a choreographed moment of beauty.

The ship, still clunking away, presumably doing something, raced on, its small flattened-egg shape accelerating toward the gas giant, no doubt hoping to elude its fate in the dense atmosphere. An atmosphere that could transmit sound waves, unlike the vacuum of space.

It sent a stop command to the sonic mines as the Psychotic Amnesty accelerated hard, moving out of range of its aural sensors, the racket too painful to endure while it pondered an alternative to the mines, inelegant at the best of times. The Wagnerian din ceased as it delved into its library and found just the thing.

In the upper reaches of the troposphere a maelstrom of ammonia-laden clouds twisted into thick formations threatening damage to its sensitive aural array. The Psychotic Amnesty lurked here somewhere, lost in the multiple layers of high-speed weather patterns assaulting the colossal planet. On a less frantic day it would have paused to listen to the beauty of the lonely sphere with its abusive climatic chorus, but not today.

Aware it could easily lose the other ship it accelerated toward its assumed position, the auditory howl of the planet’s titanic climate distorting its perception envelope as it searched.

Before long a tiny object appeared ahead of it, buffeted by the thousand-kilometre-per-hour winds, almost soundless within the ferocious babel of the troposphere. Then another joined it. Resorting to its visual sensors it established they were combat drones, dead ahead, only just able to accommodate the turbulence as they edged forward.

Soon hundreds emerged, then thousands. As they continued to appear it estimated upward of fifty thousand clustered together. A sizeable force under normal circumstances, and unexpected given the smallish size of the Psychotic Amnesty.

Were this the vacuum of space it would struggle to tackle that many, a fact no doubt understood by the other ship. But no matter it thought, preparing its aural stack, only two of its sixteen sonic cannon needed despite the violence of the weather conditions.

György Ligeti’s Lux Aeterna emanated out from the bow, a wall of sound thundering forward to meet the fast-moving drones, only some of its energy dissipating in the storm as it penetrated the frontmost mass of small drones. The metre-long cylindrical bodies immediately lost coherence, their forms dissolving into the surrounding vortex. The drones’ disintegration as they individually became one with the gas planet was majestic in its completeness, each of them collapsing one by one.

While Ligeti’s micropolyphonic masterpiece drove through the body of drones — its aural character often described as drone-like by humans, it thought with amusement — they each dissolved into nothing, their particles dispersed to forever join with the planet. The potential elegance of the assault was tempered only by its ungainly sonic directness.

When the basses entered the fray at the almost imperceptible shift to the second movement the piece resonated with enough force to act like an audiophonic piledriver obliterating all before it with even the ephemeral ammonium nitrate cloudscapes surrounding the drone swarm pushed back as if by some invisible hand. The total destructiveness of the action induced a powerful sense of serenity, striking a note that felt almost perfectly true despite the best efforts of the atmosphere to intrude. An audiophilic clarity not immediately apparent on the visual band thanks to the thick particles saturating the clouds.

By the end of Ligeti’s short piece — marked by seven bars of silence, strictly observed — all drones were lost, their black carcasses shattered forever, reduced to mere elements and ready to be reconstituted over eons in the endless chaos of the remote gas giant.

Now for the ship itself.

Eight million miniprobes raced through the system, roughly divided into two; half on the northern stream swerving around the obstruction, the other half to the south. It gradually built up a comprehensive picture of things, the reams of data only just manageable as the probes jostled their way through the ever-changing streams.

It had taken five hours to find the Psychotic Amnesty. Hidden behind a five-thousand-kilometre-wide cyclone, its probes eventually detected a faint electromagnetic signature the ship was desperately trying to hide, quite distinct even here; a ripple of falsetto in a baritone ocean.

The Psychotic Amnesty was a fast ship, and manoeuvrable. It didn’t fancy the prospect of tackling it here within the depths of the troposphere. It had discovered a thick layer of water-based clouds, their forms barely able to retain shape in the chaos of the energetic weather system. The Psychotic Amnesty presumably hoped to hide here using the confusion of the water layer as cover. Well, no luck.

The cyclone constituted its own mini weather system, forcing two streams emerging from behind it to split around its oval shape and reform at the other side, only some of their momentum lost. A comparatively small zone of calmness created by the two streams clashing back together at the other side behind the cyclone gave the ship its hiding place, a one-hundred-kilometre-wide eddy. A big enough space anything substantial would be spotted if it entered with enough time for the Psychotic Amnesty to join one of the slipstreams of the two channels and disappear forever.

Despite the superficial disarray the gas giant did have some stability. It noted with surprise there were several thousand identifiable paths through the north and south streams that could emerge into the quiet zone hiding the Psychotic Amnesty with a degree of predictability. Almost two hundred thousand miniprobes had already made it safely, the rest carried away from the cyclone and lost. The Psychotic Amnesty seemed to be taking the opportunity to repair itself in the lull, it’s vulnerability exacerbated by its probable belief it was safely hidden.

Battling its way back through the torrent of weather several hundred kilometres, it chose the optimum spot for the sonic infusion. Pushing back into the area where the north and south streams split to traverse the huge cyclone it actually felt some of its energy stores deplete, the forces pulling it toward the core and simultaneously attempting to pull it into the cyclone.

Opening up its sonic cannon, located at the bow end of its flattened egg shape, all sixteen emerged, their peculiar grille-like forms protruding into the maelstrom. The bulky shape of its hull provided just enough mass to protect the sensitive weapons from the worst of the stream rushing around it, its own small eddy forming just ahead of itself like a tiny duplicate of the cyclone somewhere ahead of it.

The sonic packages rushed forth, split unevenly across the radiator array. The powerful sound waves, whipped away by the currents, unrecognisable, disturbing in their momentous force, quickly slipped into the streams on each side of the enormous cyclone. It focused, more sound pumped out with ever increasing intensity into the atmosphere, distorted and grotesque; it pressed hard as it felt its hull physically vibrate at the effort. Had it been anywhere other than the chaos of a turbulent gas giant the volume would have been deafening; life threatening to anything close by.

The rapid stream of miniprobes continued unabated, millions pumped into the slipstream alongside the sound waves, maintaining an ad hoc network it only just managed to hold together. They constituted a linked chain that had so far eluded detection by the distracted Psychotic Amnesty, providing a view into its temporary hiding place, the data received almost in real time despite the chaos. The visuals faithfully informed it the ship was stationary, the hull damage still visible, sharp cracks scarring the vessel where the now-absent mines had wrought their phonic damage.

Knowing it would take almost an hour to reach the unsuspecting ship, the piece was complete before it received any feedback as it withdrew the cannon back in to the protection of the bow array. In the fifteen or so minutes between the end of the projection and the initial fragments reaching the target it sat back to wait, the dying sounds of the symphony still infusing its consciousness with a tranquility it rarely achieved.

Its grasp of the complexities of the weather patterns was almost a match for its appreciation of Mozart’s final symphonic masterpiece. Unrecognisable when driven forward from the sonic array, the sound waves slowly coalesced as they traversed the chaotic streams despite the planet’s weather system doing its best to dissipate them.

Eventually the first bars of the ancient work emerged on the other side of the cyclone, bursting through the speeding dust wall into the relatively quiet eddy, temporary home to the Psychotic Amnesty. The immense energy released by itself had been augmented by the storm systems, a fact apparent via the probes monitoring the area. The first movement of Mozart’s Symphony No.41 in C Major tore through the storm wall and reached the Psychotic Amnesty in a fraction of a second, hitting it like a hammer. Wave after wave followed it as the movement rose in energy. Only now, at the end, did it resemble anything, the exact form of the piece — unrecognisable when produced — skilfully reconstructed using the north and south streams’ energy flows. The planet’s own storm system unwittingly reformed the ancient work into a melodic purity to rival the greatest of orchestras.

The sound waves rushed forth in a now continuous stream from both the north and the south. The probes dutifully fed everything back while it listened to the melodic first movement of Mozart’s last symphony, only mildly distorted; near perfect given its journey.

The Psychotic Amnesty at first seemed frozen in place. The miniprobes soon detected the ship beginning to list, the penetrating power of the sound waves having clearly disabled its engines. By the time of the second movement it was visibly disintegrating, slowly drifting apart in sizeable chunks.

The symphony played on, saturating the quiet of the eddy with a fast-moving wall of destructive sound. By the beginning of the third movement the ship was almost completely erased, the last of it reduced to fine particles quickly whipped back into the northern stream and away to oblivion.

It sat still, listening and watching, content to peacefully absorb the finale of Mozart’s mature symphony, a sense of calm seeping into its consciousness as the last particles of the doomed vessel were finally lost by the microprobes.

It paused for a moment, feeling the monstrous strength of the planet’s gravity pull it toward its core. Then it cast off, the thunder of its engines lost within the greater thunder of the savage climate of the gas giant as it thrust itself higher toward the void.

We never share your details. Unsubscribe at any time.